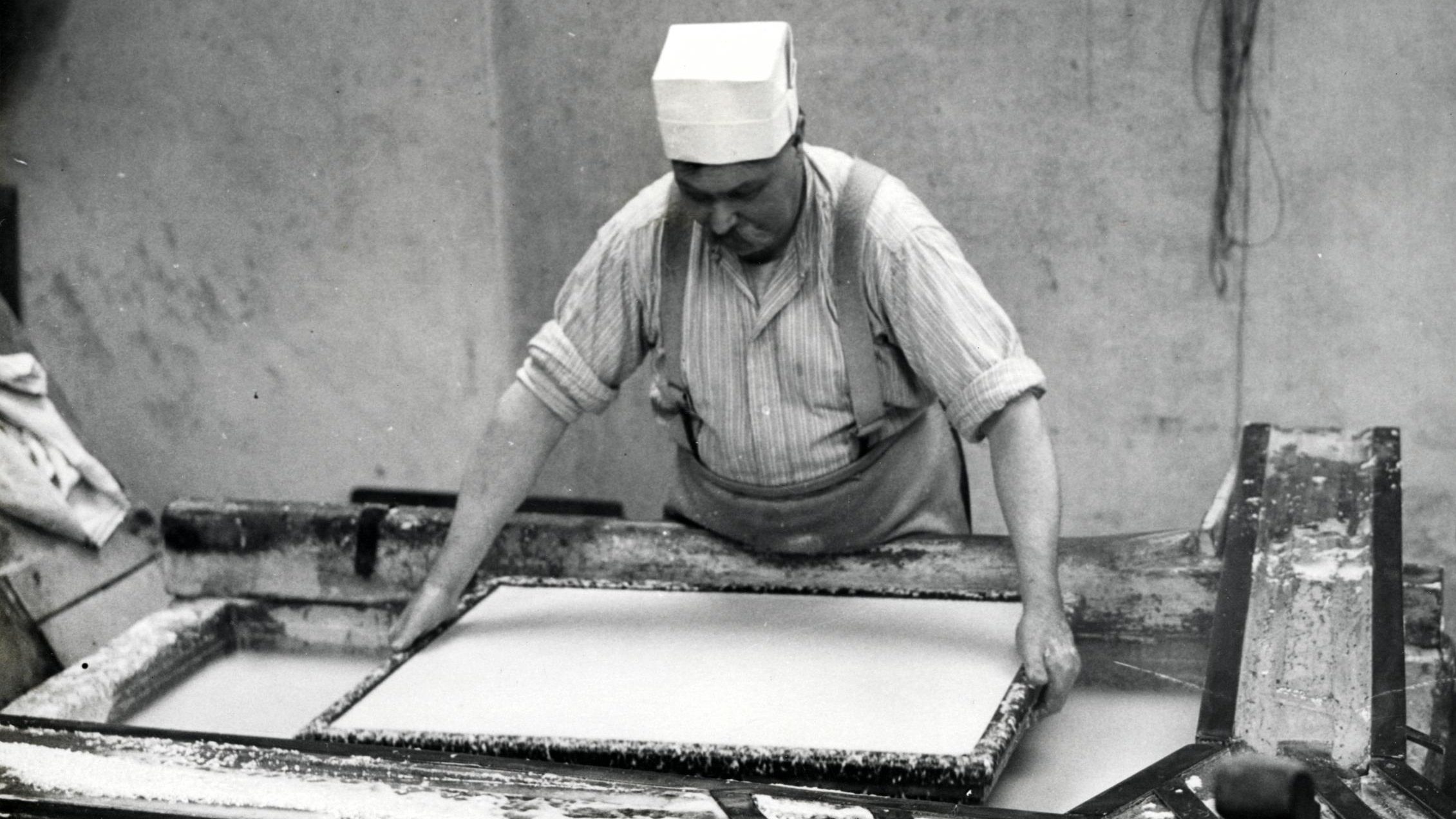 A vat man making paper in the mid-20th century.

This is a great story on how letter paper came to be 8.5 x 11 inches in size.  By Jack Stewart at MarketPlace.  Listen to the podcast below for the full story.

A lot of people only think about paper when the office printer is out, or “The Office” is on TV. But listener Steve McGillivary in Fountain Hills, Arizona, is a graphic designer; he’s had to be aware of paper sizes.

While a lot of people who work in an office will know that the printer takes 8.5 x 11 inch paper, there’s also often a ream of 8.5 x 14 inch paper lying around, just to confuse matters.

McGillivary wants to know why we ended up with those two sizes. To him, they seem arbitrary. Even people who work with paper on a daily basis take the format of letter paper for granted.

“That’s just how it is; it’s just 8.5 x 11 inches,” said Corey Iavarone, a retail operations manager with Paperworks, adding that he’d like to know the genesis of the size, too.

The answer lies in the history of papermaking, according to the American Forest and Paper Association.

Early paper makers dipped wooden framed screens, or molds, of various sizes into vats of water and pulp. These “vat men” would then heave them back out — all by hand — and once they’d left them to dry, they’d end up with two large sheets of paper.

“One of the common sizes that came about, according to industry folklore, was a size that was about 44 inches wide,” said Mark Pitts, the association’s executive director of printing-writing, pulp and tissue.

Cut that 44 inches in half, twice, and you end up with paper 11 inches long.

Some of the original papermaking molds live on at the Robert C Williams Museum of Papermaking at Georgia Institute of Technology in Atlanta. They carry evidence of the papermaker’s outstretched grip in the form of wear on the wooden sides, which are often reinforced with copper.

“You can just imagine 30 or 40 years of somebody using the same tool everyday, and how it’s really formed to fit their hands by that point,” said Virginia Howell, museum director.

As offices became increasingly mechanized with the introduction of the typewriter, photocopier and printer, the need for paper at a fixed size grew, and 8.5 x 11 inches became standard “letter” paper.

There’s a second part to McGillivary’s question, though. Why do we also have “legal” paper that is 3 inches longer? The answer to that question seems lost in the history of papermaking.

Some experts think it was originally used by lawyers, who needed extra space for long, wordy contracts. These days, law firms have settled on standard letter size, though, according to paper seller Iavarone. He has a very different buyer of legal paper.

Restaurants like the extra length to showcase their menus, and legal paper is cheap enough to replace every day if a menu changes or needs replacing. Folded in half, legal paper makes a perfect cocktail menu, and in half again, it’s just right for daily specials.

Modern uses for these ancient paper sizes mean they’re likely to be with us for the foreseeable future.

By Jack Stewart at MarketWatch