Security must be built into PCs and printers, not bolted on as an afterthought. By designing for cyber resilience, healthcare organizations can help reduce the risk of attacks, increase user productivity by helping to eliminate downtime, cut IT costs, improve compliance, and get back to what they do best—patient care.

The costs of a breach can be staggering.
A data breach can inflict huge costs on organizations and their patients. The ramifications of a security breach could include identity theft, stolen competitive information, a tarnished brand image and reputation, and litigation. Plus, regulatory and legal noncompliance can result in heavy fines. 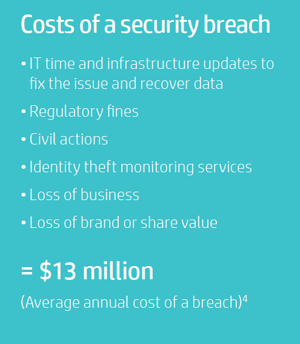 Medical patient records are covered by particularly strict regulations, such as HIPAA (Health Insurance Portability and Accountability Act) in the US. Healthcare breaches remain the most costly per record because of their high visibility and multiple downstream impacts. The healthcare industry has the highest per-capita data breach cost, at $408 per compromised record—nearly twice the cost per record for financial organizations.

Security breaches are increasing in frequency. According to Risk Based Security, 2017 saw more than 5,200 breaches that exposed nearly 7.9 billion records That figure rose to 6,500 breaches in 2018. Medical patient records are particularly lucrative targets.

In addition to the financial costs of a security breach, loss of productivity can also cause big problems. Malicious attacks can make PCs and Printers unusable or can cut off providers from the data they need to treat patients safely. An attack at the BIOS level can take hundreds or even thousands of devices down, bringing operations to a halt across an entire organization. 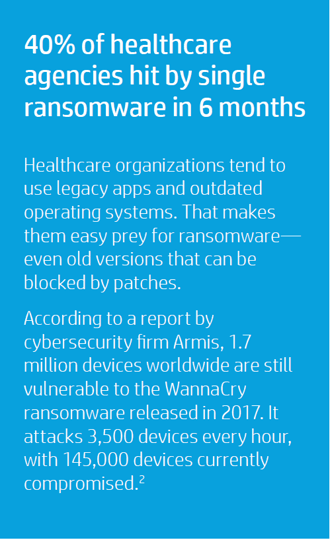 The firewall isn’t enough to protect the network

Many organizations are counting on their firewalls to protect the data and devices within the network, but this isn’t enough. It’s becoming much easier for hackers to break into networks through under-secured endpoints like IoT devices, PCs, and printers. In a typical organization, the number of endpoints is much greater than the number of servers, sometimes as many as two devices per employee. Consider all the computers and printers healthcare workers use throughout the day—including portable devices used in patient rooms and laptops taken home for use after hours. The sheer volume of endpoints increases the risk. Just one stolen or vulnerable device can provide entry to the network, expose sensitive data, and put the entire infrastructure at risk. That’s why it’s so important to deploy devices with built-in security protections that can detect and automatically recover from attacks.

Most printers, copiers, and multi-function devices on your network are basically the same as having an unprotected PC with admin access on your network.  These print device come with quad core processors, GBs of memory, hard drives, and an operating system such as Windows CE , Android, or some form of Unix. The means that anyone who knows how to exploit these devices or Operating Systems will be able to cause large scale disruptions to your business.  And to think that you trust these devices with your most sensitive documents and patient information.

That's why TotalPrint USA has teamed with HP.  HP has the world's most secure printers, copiers and multi-function devices.  HP printers have the industry’s strongest security, with four key technologies that are always on guard, continually detecting and stopping threats while adapting to new ones. Only HP Enterprise printers automatically self-heal from attacks by triggering a reboot—IT doesn’t need to intervene.

TotalPrint USA is a leader in the Secure Managed Print industry.  We offer the highest level of security products to protect your healthcare organization.  When you combine that with our Nationwide Service footprint, you will see why more and more Healthcare Organizations are choosing TotalPrint USA for their Secure Managed Print Services Provider.